The military is setting the stage for a final showdown in Chin State and Sagaing and Magway regions, say local resistance groups

The Myanmar military has deployed thousands of troops to upper Myanmar in recent weeks in what appears to be preparation for a concerted push to crush an anti-coup uprising that has inflicted heavy casualties on the junta army, according to locals and sources within the armed resistance movement.

Chin State and Sagaing and Magway regions have seen a heavy build-up of military forces since the beginning of the month, the sources said. This comes after months of fierce clashes between junta troops and local resistance groups operating as part of the People’s Defence Force (PDF) formed by the shadow National Unity Government (NUG). 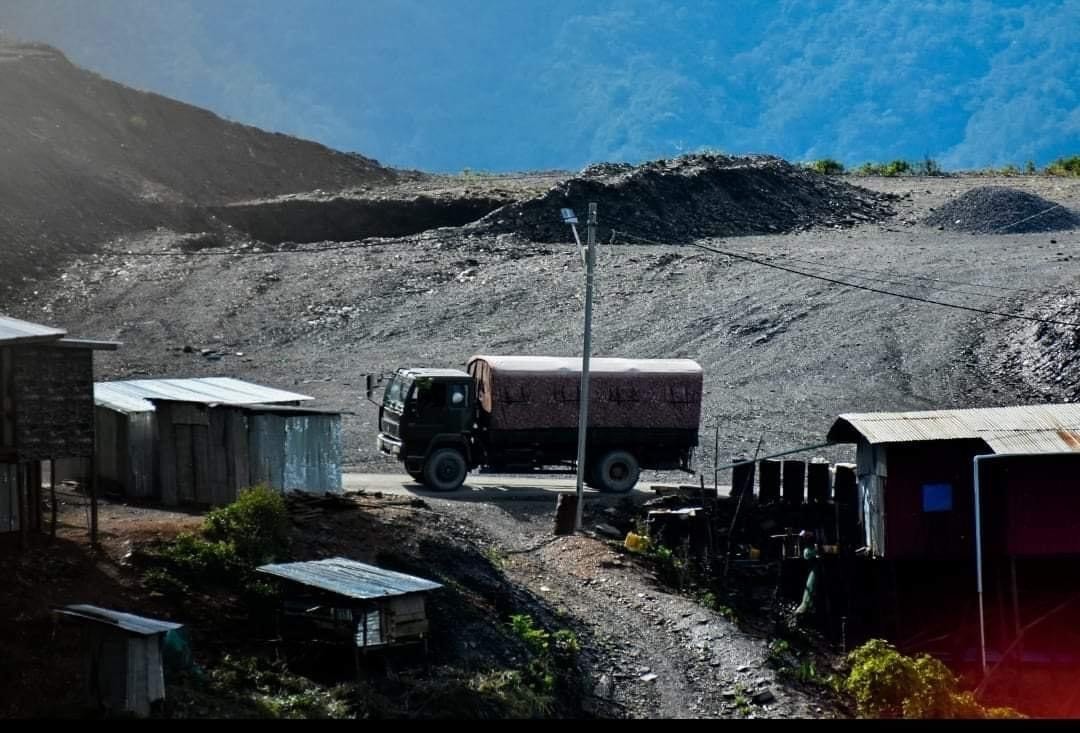 A military vehicle passes through Falam Township in Chin State on October 12 (The Chin Journal)According to figures released by the NUG, the army suffered at least 1,500 casualties in more than 700 armed conflicts between June and September in the areas that are now coming under the most intense pressure.

In retaliation for these losses, the regime has raided scores of villages, forcing tens of thousands of civilians to flee. It has also shut down internet access in 25 townships, in what was seen by many as further evidence of the regime’s plans to carry out massive military operations that will likely lead to a dramatic increase in civilian casualties.

Resistance sources also point to reports that Lt-Gen Than Hlaing, the junta’s deputy minister of home affairs and chief of the Myanmar Police Force, has taken over as commander of the military’s Northwestern Regional Command, which oversees operations in Chin State and Sagaing and Magway regions, as an indication of the regime’s focus on upper Myanmar as key to its efforts to consolidate control over the country.

Meanwhile, several local news outlets have reported that the previous commander, Brig-Gen Phyo Thant, has been detained for allegedly planning to defect to resistance forces and take refuge in an area controlled by an ethnic armed group.

According to military and resistance sources cited in a report published by The Irrawaddy last Friday, the junta has sent at least four battalions, or around 3,000 soldiers, to northwestern Myanmar to take part in “clearance operations” against anti-regime forces.

Although Myanmar Now has been unable to confirm these figures, local residents and resistance sources say they have seen hundreds of military trucks traveling across the region in recent weeks.

A deputy commander of the Chinland Defence Force (CDF) in Chin State’s Kapetlet Township said his brigade had learned that a convoy of three armoured vehicles and at least 86 military trucks loaded with soldiers had left Pakokku in Magway Region early Tuesday and were heading towards Kanpetlet.

“We heard they passed Pauk this morning,” he said on Tuesday, referring to a town in Magway about 110km northeast of Kanpetlet.

By late afternoon, the convoy had reached the airport in Kyaukhtu, a town on the border between Chin State and Magway Region and less than 60km from Kanpetlet, according to the Chin-based media outlet Zalen News.

Four days earlier, about 40 military trucks and two armoured vehicles left Gangaw in Magway and arrived at Kalay in Sagaing, according to locals. They said the two armoured vehicles and 14 of the military trucks left for Tedim in northern Chin State the next day. They added that the remaining vehicles left for an unknown destination in northern Chin State on Monday.

On Sunday, around 30 family members of high-ranking army personnel based in Kalay were evacuated in a military aircraft, according to a resident of the town who spoke on condition of anonymity. The move has raised fears that the military is planning to launch offensives in the region soon, he added.

“There have been a lot of military planes landing and taking off recently, as well as military reinforcements and tanks. People are saying there will be serious clashes soon. So it’s possible that’s why the families of army personnel left,” he said.

The military is not only sending reinforcements to Sagaing and Chin, but has also to the Yaw region of Magway, according to a spokesperson for the main local resistance group, the Yaw Defence Force. Yaw region connects Magway to Chin in the west and Sagaing in the north.

The spokesperson said that his group and its allies are ready for the junta’s offensives, but need more support from the NUG to face an enemy that has more advanced weapons and no scruples about using excessive force.

“We are still in the position of defensive warfare,” he said, noting that resistance forces have relied mainly on ambushes and other guerrilla tactics to slow down the army’s advance.

In Sagaing Region’s Pale Township, a local PDF leader said that fighting has intensified and is likely to continue to get worse until one side or the other prevails.

“The military has been launching offensives every three or four days in our area, deploying more and more troops. The tension between resistance groups and the military has been high. Until one side has lost decisively, there will be more severe clashes,” said the leader, who identified himself as Naga.

The goal of the military is to break the resistance “into pieces,” according to Zin Yaw, a former army captain who has defected to the anti-regime resistance.

“Even if the resistance forces stop their attacks on army troops, the military will try to break them into pieces,” he said, noting that this is the military’s usual strategy when facing strong opposition.

As “alarming” reports of the military’s actions continue to pour out of the country, the United Nations human rights agency OHCHR has called on the international community to join forces to address the ongoing crisis in Myanmar.

“There has been an established pattern of attacks by the Tatmadaw [military] against unarmed individuals using lethal force, destruction of residential properties, mass arbitrary detention and deaths in military custody,” OHCHR spokesperson Ravina Shamdasani told reporters on Friday.

“We urge the international community to speak with one voice, to prevent the commission of further serious human rights violations against the people of Myanmar,” she added.

However, resistance forces in targeted regions appear to be placing their hopes more on coordinated action within Myanmar.

“It will be best if armed resistance fighters can launch offensives in areas where the military is weak,” said a CDF official who asked not to be named.