To keep you updated on what happened in Myanmar in the last 24 hours, here are the main events of the day more than three months after the putsch.

By THE IRRAWADDY 28 May 2021
U Myint Swe, the chairman of the Bilin Township chapter of the Union Solidarity and Development Party in Mon State was shot dead by two unidentified motorcyclists in Bilin.
The administrator of Man Pyay No. 3 Ward in Yangon’s Thaketa was found dead after an explosion at his house. At least five explosions occurred in Thaketa, targeting two police stations and the administrator.
An explosion occurred near the Pinlong Bridge in North Dagon, with no reported injuries.

Explosions occurred near the Road Transport Administration Department in Insein and at an electricity office in Thingangyun.

An explosion was reported at a government office in No. 4 Ward in South Okkalapa Township. Young people in Sanchaung staged a flash mob protest against the military regime.
In Kachin State’s Hpakant, a military collaborator was shot dead at his home in Naung Mi Village on Tanai-Ledo Road.

Anti-regime protesters in Hpakant held a memorial for 19-year-old Maung Thant Zaw, who was shot dead during an anti-regime protest by junta forces in the town two months ago.
In Mandalay Region, a junta soldier providing security outside a public hospital in Meiktila was shot dead by an unidentified person from a vehicle.

An explosion took place at a gem market in Maha Aungmyay Township. 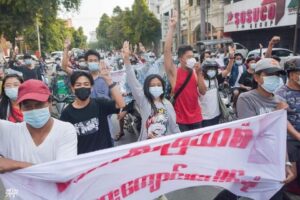 Meanwhile, people in Bagan called for the establishment of federal democracy an﻿d the release of detained political prisoners.
Buddhist monks in Mandalay conducted daily prayers for the Myanmar people as they suffer under military rule. Young anti-regime protesters held a memorial for those who have fallen in the Spring Revolution in Mandalay.
People from different parts of Mandalay marched in protest at the military regime, with students from Aungmyethazan calling for a boycott of education under military rule.
In Myingyan, anti-regime protesters marched inside a market, urging people to root out the military dictatorship. Residents of Tammawaddy Ward in Mandalay staged a night protest banging pots and pans.
In Ayeyarwady Region, four explosions occurred at Chaungtha Beach in Pathein District at night.

In Shan State, a man was injured in an explosion in Aye Tharyar town in Taunggyi.

Twenty-seven guns and ammunition bound for Myanmar were seized by Thai authorities at Mae Sai near the Thai-Myanmar border.

In Magwe Region, junta troops arrested a striking teacher at her house in Taungdwingyi.

In Kayah State, junta forces killed two civilians and fired on a church as fighting with the Karenni People’s Defense Force (KPDF) continued in Demoso Township.

A fire broke out at the manager’s office at Belu Creek Hydropower Plant No. 1 in the state capital, Loikaw.
In Tanintharyi Region, people took to the streets against the military regime in Dawei, Launglon and Kanpauk.
In Sagaing Region’s Monywa, rural folk took to the streets to show their opposition to the military regime.
Source – Myanmar Daily Post-Coup Update: May 27 (irrawaddy.com)